You Have NO Expiration Date!

The most commonly touted benefit of proper and regular exercise is a longer, healthier lifespan.  Countless studies have shown this to be the case, and our doctors remind us of it when we go in for check ups (and especially for more serious issues).  The awareness of our own mortality is a powerful driving force in our society. For example, how many products and services can you think of that exist because of our desire to live longer and be healthier???  As human beings, we have found innovative ways to extend our stay on this rock, and we always marvel at how celebrities stay fit and active into their more advanced years.  We tell ourselves that we should follow their example of not letting age hold us back.  From radical diets, to new surgical techniques, to gene therapy and stem cell research — we have all sorts of life-extending tools at our disposal!

Yet at the same time, we are raised with the common knowledge that we can’t beat Father Time.  Sooner or later, we all wear out.  We can’t run as fast or jump as high (or at all).  That nagging joint pain doesn’t go away.  Things that were “up here” are now “down there.”  The notion of aging can feel frightening and inescapable.  But I think the bigger question is this:

Do we have to age a certain way?

After reading another news article recently, I started thinking about this idea.  Bear with me here…

It seems to be common knowledge that at a certain point, you just have to slow down.  In fact, many of the cynics in our society take it upon themselves to REMIND Grandpa of his age in an attempt to get him to act it.  Perhaps it’s borne out of jealousy or bitterness, but it seems some of us are offended by the notion that some people break down in middle age, while others go forging ahead into their 80s, 90s, or beyond!  I don’t know about you, but if I see a 75-year-old lady busting out a crow pose in Yoga, I don’t think she’s misguided — I think she’s doing something RIGHT!

Think about it.  All things being equal, wouldn’t you rather be able to do those things than not?

“Of course, but it just gets harder and harder… for some people, it’s just not possible!”

It happens to the best of us. But it’s usually preventable!

Ah, but there’s the crux of the argument, eh?  WHY do some people break down, while others seem to hold up just fine?  I feel that it’s for a few reasons, and they aren’t all out of our hands:

#1 – GENETICS — The biggest culprit that we blame one way or another for almost every problem that pops up over our lives.  While we can’t alter our DNA (not yet, anyway), we can change our approach to the problems it does hand us.  Most medical experts on the planet will agree that genetics will only play a partial role in our likelihood of contracting most of the illnesses that take lives.  SOME.  NOT ALL.

#2 – DIET –I don’t claim to be an expert on nutrition, but it’s quite clear that what we put into our bodies can have a pronounced, cumulative effect on our bodies’ ability to adapt and repair itself.  Too much of the wrong things, and we break down.  Whether from oxidative damage, poor blood flow from a weak or blocked cardiovascular system, a weak immune system or a ton of other diseases, we will most certainly kick the bucket sooner if we don’t take care of what we put in.

#3 – EXERCISE — Regular physical activity has been shown to be quite beneficial in keeping our cells functioning longer.  We maintain conditioning, coordination and strength that we would not have otherwise kept over the years.  All things being equal, the guy who exercised (sensibly) will last longer and have a more enjoyable life than the fellow who didn’t.

Now these three things are almost certainly familiar to anyone reading this post.  No big surprise.  That stuff still doesn’t account for how some people outlive others by decades while apparently doing the same stuff.  Unless we all actually DO have some sort of built-in expiration date.  Right?  Well here’s where a fourth and often-overlooked piece of the puzzle comes in:

Notice that I always talk about sensible exercise.  This is a big deal.  I use the term vigilance to describe the act of constantly observing what is going on with our bodies and making logical adjustments.

Think about your last workout (or the last time you exerted yourself in any way).  Did something hurt?  I don’t mean a little muscular soreness.  I’m talking about more intense pain in a bone, a joint, or deep in a muscle or tendon that might cause issues with doing that exercise again.  For the sake of argument, let’s assume you did feel something like that.  Now did you wonder WHY it hurt, or did you just accept that it did because “that’s the way things are”?  Take a moment to think about this…

Many people would say that pain and breakdown come with the territory.  After all, “No Pain, No Gain” has been a staple of the exercise world since long before I was born (Thanks, Jane Fonda)!  But is it true?  I don’t think so.  After all, exercise is supposed to be good for you.  The trouble is, we’ve been conditioned to think of pain as always being a good thing.  But here’s a news flash — pain is your body’s way of telling you that something is wrong! If you choose to ignore it, you may be setting yourself up for bigger issues down the road. 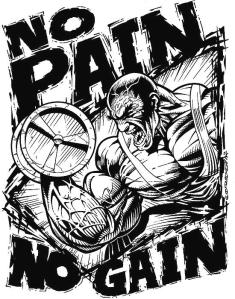 Perhaps we should step back and get a LITTLE perspective, eh?

So, getting to the point, I think that what separates the people who last from the ones who don’t is their ability to make those micro-adjustments.  To see where they may be off-track with a workout or habit and curb it before it causes permanent damage.  I will be putting up posts in the future  with more specific thoughts on the subject (with a little science to back it up!)  But suffice it to say, the human body is such a complex machine that we can’t possibly assume we know what’s going on all the time.  We have to give it a little respect and learn how to LISTEN TO IT.  As I always suggest, exercise in a way that works for YOU.  Eat in ways that work for YOU.

Live the best life that YOU can!

Finally, for anyone interested in knowing, the article that inspired this long-winded rant was one about Janet Evans.  She’s a former Olympic gold medalist swimmer who came back from a LONG hiatus to compete at the Olympic trials.  She did this at age 40 (closer to 41), and her story is inspiring.  Check the link out here:

More is always on the way!